AMARILLO – Salt cedar along the waterways of the southern and eastern Panhandle is rapidly being defoliated and dying back, and one Texas A&M AgriLife Research entomologist believes he knows why. 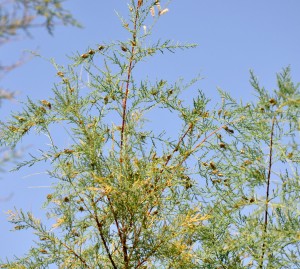 Salt cedar beetles came out by the hundreds and rapidly multiplied this summer, defoliating salt cedar trees along waterways in the eastern and southern parts of the Panhandle. (Texas A&M AgriLife Research photo by Dr. Jerry Michels)

When salt cedar beetles from Uzbekistan were released in 2006 by Dr. Jerry Michels and his entomology crew in parts of Lake Meredith and the Palo Duro Canyon, it was thought they would be more prolific eaters of salt cedar than other beetle species tried before.

Salt cedar displaces native vegetation and impacts the availability of water, Michels said. Numerous projects have been conducted across the state to see if salt cedar beetles can help control the salt cedar along the infested waterways. If the beetles repeatedly defoliate the trees for several years, the salt cedar will die back and leave more water.

[youtube]http://youtu.be/H7FPyaBR8P0[/youtube]But the initial releases of beetles didn’t take off and establish themselves immediately, for one reason or another, Michels said. They just never seemed to make it from one season to the next.

“However, we’ve had such a surprise this year,” he said. “This species of beetle has exploded all across the area from Wichita Falls to north of the Canadian River on the eastern side of the Panhandle and all the way west into the Palo Duro Canyon.” Water-hog salt cedar trees were defoliated and killed off for the year with the proliferation of salt cedar beetles this summer along Mulberry Creek in the southeastern Panhandle. (Texas A&M AgriLife Research photo by Kay Ledbetter)

Michels said he believes it can mostly be attributed to weather.

“We had a hot summer and it warmed up earlier, so we think they came out earlier and began multiplying quicker,” he said. “And we didn’t have a late season freeze in the spring that typically kills off a bunch, so they had a chance to rapidly multiply.”

At the time of their release, the beetles from Uzbekistan seemed to be most suited to the climate at this latitude and longitude, and Michels said this year could be proof.

“We started getting calls about dying salt cedar in June and they just kept coming,” he said. “We were happy with what we initially saw, and now we are just blown away when we are looking at the watersheds and river drainages – we’ve found the defoliation every place we’ve gone.”

That includes west of Texas Highway 70 along the Canadian River and all along the Prairie Dog Town Fork of the Red River as it travels east out of the Palo Duro Canyon to Estelline and the Red River north of Childress. Michels said more research will be needed to try to determine what species the beetles are and track their path from the various release points. He and other entomologists will be tracking their movement to help better understand what helped them to thrive this year.

“Where these infestations originated is a bit unclear,” he said. “We made releases of this species at Palo Duro Canyon in 2007. The Palo Duro Canyon study was flooded out. The cages were destroyed and we figured the beetles were carried downstream.”

But, Michels said, other releases of this species were made near Matador by Chip Ruthven, manager of the Matador Wildlife Management Area, in coordination with the U.S. Department of Agriculture and Texas A&M AgriLife Extension Service in Dallas in 2004 and later.

“The one thing that may give us a clue as to what and where the beetles came from is the work James Tracy, a doctorate student at Texas A&M University, is doing.”

Michels said the Matador beetles may have interbred with another species of the beetle from Tunisia that had been released in the Pecos River area, and the Palo Duro Canyon beetles came from a group in New Mexico that may have hybridized with a species of the beetle from Crete. Multiple releases were made at early sites, beginning as early as 2004 with some from Posidi, Greece.

“We may be able to tell where the current beetles come from by looking at the amount and type of hybridization we see in the beetles we collect,” he said.

Michels said some of the beetles released have worked, while others didn’t. But there has been some hybridization taking place through the years.

“These beetles come out every spring, but because many years have a late freeze, they have a hard time multiplying into effective numbers,” he said.

“This year, it was warm early and there was rain and all the plants greened up and they had food and began mating early. With no freeze to kill them off, we ended up with several generations in one summer,” Michels said.

He said they generally expect the salt cedar beetles to produce four generations each summer, but this year, “I think we definitely got more. They thrive in heat, so they are going like gangbusters.”

But Michels said even with this kind of die-back of the salt cedars this year, it will take two to three years of defoliation to kill the trees completely.

“If after this year this wasn’t enough of a population growth to keep them here permanently, then they will never establish,” he said. “But I think we have enough that will over-winter and they will stay around.”
-30-