AMARILLO – Under contract with the Texas Commission on Environmental Quality, Texas A&M AgriLife Research has begun monitoring sulfur dioxide concentrations in Amarillo, according to the AgriLife Research engineer in charge of the project. 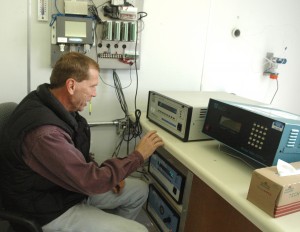 As one of EPA’s six “criteria pollutants” under the federal Clean Air Act, sulfur dioxide is the subject of a primary air quality standard designed to protect public health, Auvermann said.

Putting a site in Amarillo wasn’t due to expected high concentrations of sulfur dioxide, but rather the absence of monitoring locations in this part of Texas, he said. EPA set the site-locating criteria and specifications; TCEQ selected and built the site per those specifications; and AgriLife Research has been contracted to operate and maintain the site.

Auvermann has supervised monitoring of Amarillo’s fine-particle concentrations for the Texas commission and EPA for almost 10 years to ensure Amarillo and the region’s air quality meet federal standards. A monitoring site for sulfur dioxide concentrations has been set up in Amarillo. (Texas A&M AgriLife Research photo by Kay Ledbetter)

He also oversees the National Atmospheric Deposition Program and Clean Air Status and Trends Network monitoring site at Canonceta south of Amarillo, where instruments estimate the wet and dry deposition of various forms of nitrogen and sulfur.

Sulfur dioxide gas is a hazardous gas produced when fossil fuels – coal, diesel, natural gas – that contain sulfur are burned, he said. At high levels, it is considered a threat to the respiratory health of humans and animals.

The Amarillo monitoring site includes instrumentation to measure sulfur dioxide concentrations, as well as a weather station to collect data that will help interpret where any elevated concentrations might come from, Auvermann said.

“And I simply do not expect us to be one, at least not during my career,” he said. “But background monitoring allows us to see trends as they develop.”

Another reason Amarillo’s measurements will probably stay low, he said, is that the power plants in this region burn relatively low-sulfur coal out of Wyoming’s Powder River Basin.