“The cotton market is not booming as yarn prices remain flat,” Robinson said. “We’re not in a recession, but in a period of low growth and modest consumption. We don’t see anything that would pull up cotton prices in the near term.”

Robinson said speculative funds have been swinging from net short to neutral, and cotton futures have just hung in there around 60 cents. 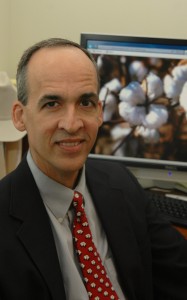 Consequently, cotton has been ranging in the mid to upper 60s, he said.

For now, Chinese policy is one of the major influencers of the market, Robinson said.

“That, and the fact that more of the Chinese new crop cotton and reserves are getting used by China rather than buying U.S. exports continues to weigh heavily on market prices,” he said.

“If you have cotton in the loan, I would think about selling it and maybe use a call option strategy,” he said. “The end of the year carryover is projected to be more than 4 million bales. That’s more than enough cotton to fulfill demand.”

The 2015 outlook has projections of 15 million to 16 million bales produced in the U.S., he said.

“We will still plant plenty of acres despite projections of fewer planted acres,” Robinson said. “At least 15 million bales of production is projected for 2015.I don’t see any reason for new crop prices to be higher than old crop prices.”

Meanwhile, during the association’s awards luncheon, the Norman Borlaug Lifetime Achievement Award was given posthumously to the family of Dr. Tom Cothren, a longtime Texas A&M AgriLife plant physiologist. Cothren came to Texas A&M in 1982 after serving on the faculty at the University of Arkansas. He received many honors during his years of teaching and research, including Fellow of American Society of Agronomy, Fellow of Crop Science Society of America, Outstanding Research Award in Cotton Physiology and the Special Achievement Award for Teaching from Texas A&M. He also served on the Faculty Senate at Texas A&M.